Learn more about BB Media at NATPE Budapest from the 27th to the 30th of June 2022 in Budapest, Hungary.

Multiscreens+ | Content Pulse monitors the content available on streaming services streaming platforms and their standardized metadata. With this service, BB Media is currently able to survey 52 countries in the European continent. Referring to Central and Eastern Europe it was possible to identify +360 streaming services, available at a regional level. Moreover, +111K unique titles were detected on these services, of which 85,256 titles correspond to movies and 26,194 titles to series. Notably, 1,820 titles were released in 2022 so far. Poland, Russian Federation and Slovakia are the top 3 countries of Eastern Europe that have more available content.

The top 5 countries in this continent, where content from Central and Eastern Europe is offered, are United Kingdom, Russia, Ireland, Germany, and Spain

When it comes to SVOD platforms with unique titles licensed and produced in Central and Eastern Europe, the top 3 OTTs with more SVOD content are Megogo, with a total of 13,598 titles, followed by Kion, featuring a total of 12,367 titles, and closing the list is Ivi, which has a total of 12,108 titles. Only 15 titles are shared among these three platforms.

Analyzing Megogo, the SVOD platform that has more content in this region, it was found that Ukraine, Azerbaijan and Georgia are the countries with more titles from this Streaming Service, with Ukraine presenting 5,652 total titles. Drama (24%), comedy (14%) and romance (8%) are the top 3 genres offered by this platform in the Central and Eastern Europe region.

As for the most watched titles by the Central and Eastern Europe people, “Top Gun: Maverick” is in the lead, is available only on iTunes in Bulgaria, Czech Republic, Estonia, Hungary, Lithuania, Slovakia and Slovenia. “Everything Everywhere All at Once” comes secondly, with Russia being the only country where it can be found, in 4 OTTs. Lastly, “Stranger Things” only streams on Netflix in a total of 10 countries.

BB Media’s service Multiscreens+ | Prices, Plans & Bundles analyses the prices, plans, commercial alliances, offers, devices and functionalities of all streaming platforms. With this service it was identified that HBO GO is the OTT with more alliances in Eastern Europe, with 57 different companies. Netflix takes the second place with 14 commercial partnerships, and Go3 takes the third place, with 11 commercial partnerships. But neither of these three services provide any offers or free trails.

Tomás will present at the event one of the company’s latest releases, the Multiscreens+ service, which lays out an analysis of the content offer of streaming platforms. Special emphasis will be placed on the report Multiscreens+ | Content Pulse, which is focused on the monitoring of the content available on streaming platforms and its standardized metadata. Multiscreens+ has inspired large amounts of clients in the UK, India, USA, Spain, and even multiple Southeast Asian countries, with global data on content offerings on +3,000 platforms available in +230 countries.

To coordinate face-to-face meetings with BB Media at Stream TV Show, get in touch with: marketing@bb.vision 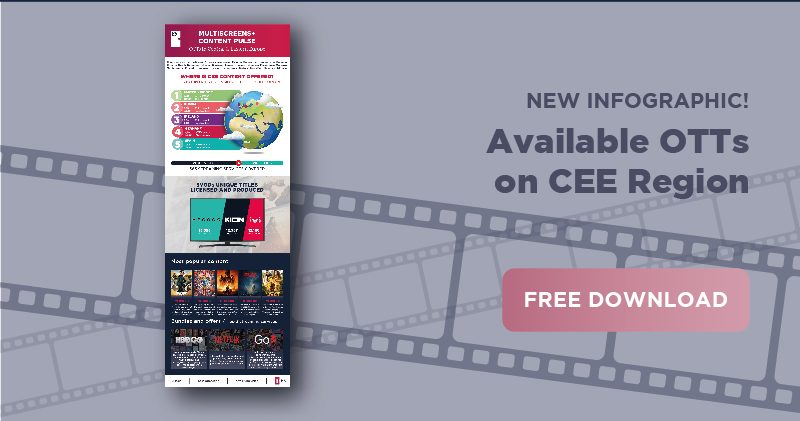