The US and Latin America, a comparison between markets

BB Media presents an offer and demand analysis of streaming content in LATAM and the United States.

When analyzing the demand levels in both the United States and Latin America, 86% of households with fixed internet access watch online content, according to BB Media, global data science company. 77% of American households that consume this type of content watch movies, while 60% watch series. Considering LATAM, in this region the consumption of movies and series is 89% and 81%, respectively.

Latin-American consumers that have a Netflix account tend to choose American series, placing them in the TOP 5 of titles with the highest reach. According to SoDA LATAM by BB Media & Digital I, ‘Stranger things’ (watched by 25.4M accounts), ‘Bridgerton’ (19.9M), ‘Cobra Kai’ (17.6M), ‘Manifest’ (16.5M) and ‘The umbrella academy’ (16.4M) are the Netflix contents from the United States that showed the highest reach in 2022 in Argentina, Brazil, Colombia and Mexico. The same goes for Amazon Prime Video users in this region, with the series ‘The boys’ (9.8M), ‘The good doctor’ (3.3M), ‘The office’ (3.2M), ‘This is us’ (2.6M) and ‘How I met your mother’ (2.6M) topping their respective ranking.

Among the most used devices by users in the United States to watch online content are the Smart TV (69%), the Smartphone (51%) and computers (35%), which indicates that they usually prefer the comfort of home to consume such content. In the case of Latin America, when users were asked about the preferred device, the most voted was the Smart TV, with 48%, coinciding with the usage habits of the United States.

It is not surprising that the United States leads the ranking of countries with the highest number of streaming contents, as it has +469K titles across 228 platforms monitored by BB Media. A striking fact is that, of those contents, 44% are offered under an AVOD business model, being the most offered in the country. It should be noted that a title may appear under more than one business model, but this is still an important percentage when noting that 25% of the total titles fall under the SVOD model and 23% under the TVOD.

Focusing on productions from the United States, BB Media found that +48K titles from this country are available around the world. In this case, 18% are offered under an AVOD model, while the TVOD model appears on the scene with 29% contents, and the SVOD with 27%. On the other hand, Americans can access +75K local titles, of which +62.8K correspond to films and +12.4K to series.

But when talking about regional streaming content, Latin America is one that garners interest for its growth. With +220K titles offered through 1,359 streaming platforms detected to date, just a year ago the region showed +134K monitored titles. Mexico (136K titles), Brazil (128K titles) and Argentina (120K titles) are the countries with the largest number of global content available, while the ranking changes when talking about local titles in the region: Brazil appears first with 5,5K titles, Mexico second with 4,8K and Argentina third with 2,4K. 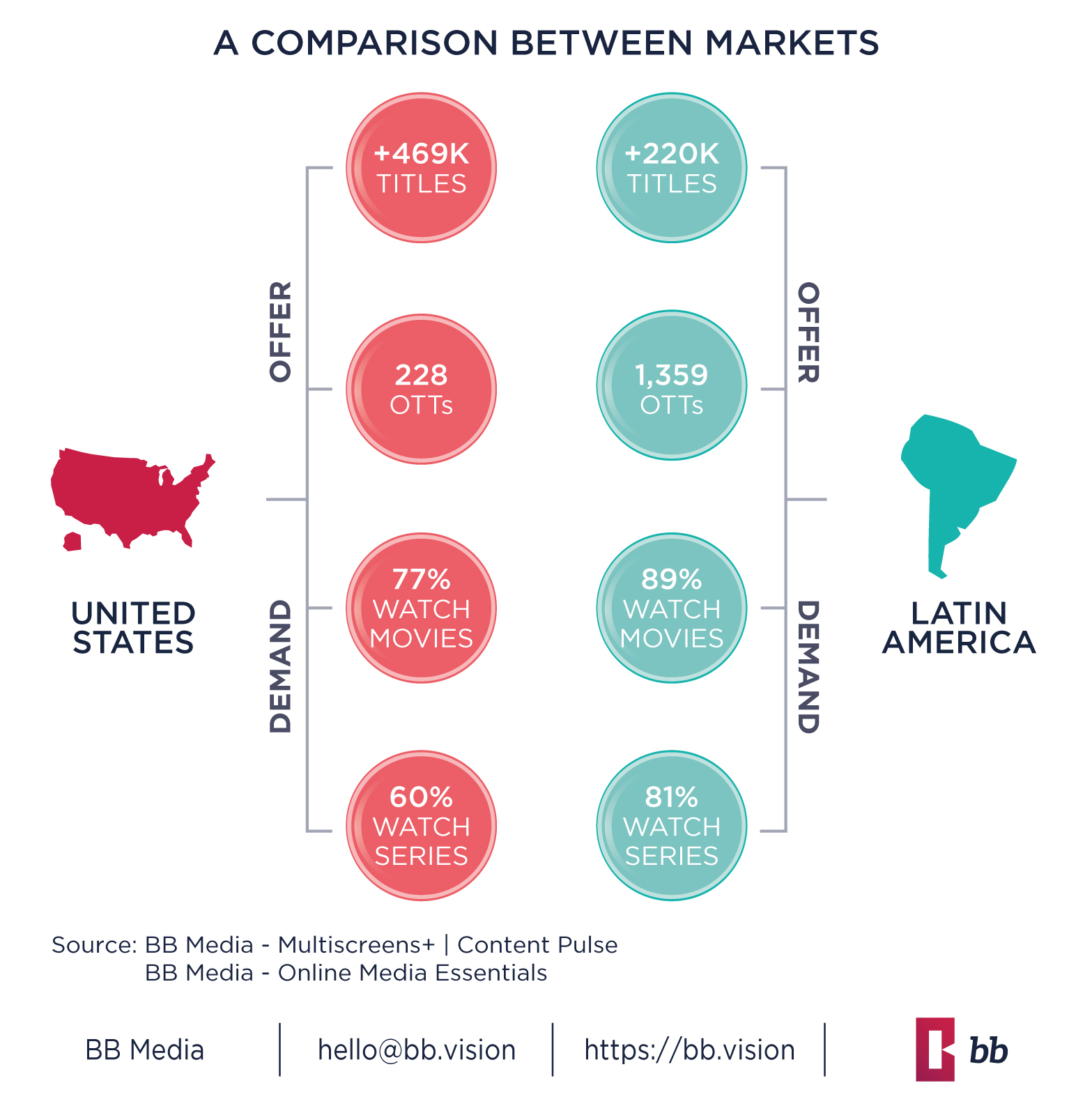 Horacio Gennari, Founder and President of BB Media, will be part of “Content Americas Opening Session: Content Trends 2023”, a panel composed of different industry experts. In said panel, Horacio will share insights about the market. He will be accompanied by Rosario Buil, LATAM Account Director of BB Media.

Horacio and Rosario will also participate in the OTT.x Miami Salon with Tom Gennari, CEO of BB Media. It is an exclusive salon and cocktail reception for OTT.x members and select guests.

For more information, write to marketing@bb.vision