Amazon Prime Video: The streaming service with the most convenient price/quantity ratio

An analysis of Streaming Platforms’ plans in relation to their content

In the current scenario, many streaming platforms coexist, each with a unique proposal and a different offer of titles. It can be difficult to keep track of this diversity of offers or knowing the best prices and plans according to the variety of content. Is it possible to know how much you pay for each title?

For this analysis, the plans and titles of five of the most important platforms in the U.S. were reviewed: Netflix, Amazon Prime Video, Disney+, HBO Max and Hulu.

Making an analysis based on monthly subscriptions of the streaming platforms it was found that Amazon Prime Video is the one with the cheapest price per 100 titles (USD 0,14). This is interesting because it is also the streaming service that has more titles in its library (10,598). On the contrary, the platforms with the most expensive price per 100 titles are Disney+ and HBO Max (USD 0,47), but the difference lays down on the amount of contents, since HBO Max has more than Disney+.

When reviewing plans with ads, HBO Max is again the streaming platform with the highest price per 100 titles, while Hulu has the cheapest price. However, when considering Disney+ ads’ package, that includes Hulu and ESPN+, this plan turns out to be the one that has the lowest cost for 100 contents.

Of the analyzed streaming services, HBO Max and Amazon Prime Video offer some free titles on their libraries. HBO Max gives the Latin American users some episodes to watch for free and without a paid subscription. On the other hand, Prime Video provides some selected movies & series in the United States and the United Kingdom, while in Japan it offers the first episode for free on Prime Video Channels. Another interesting insight regarding this streaming platform is that it provides 103 additional channels in the US that can be added to its starter plan.

Netflix’s case is worth mentioning because it doesn’t offer a free plan or an annual plan, it only offers different alternatives of a monthly plan. However, it just announced that by the end of 2022 it will be launching a new ad–supported tier with a cost of USD 6,99 and will only be available in some countries around the globe. 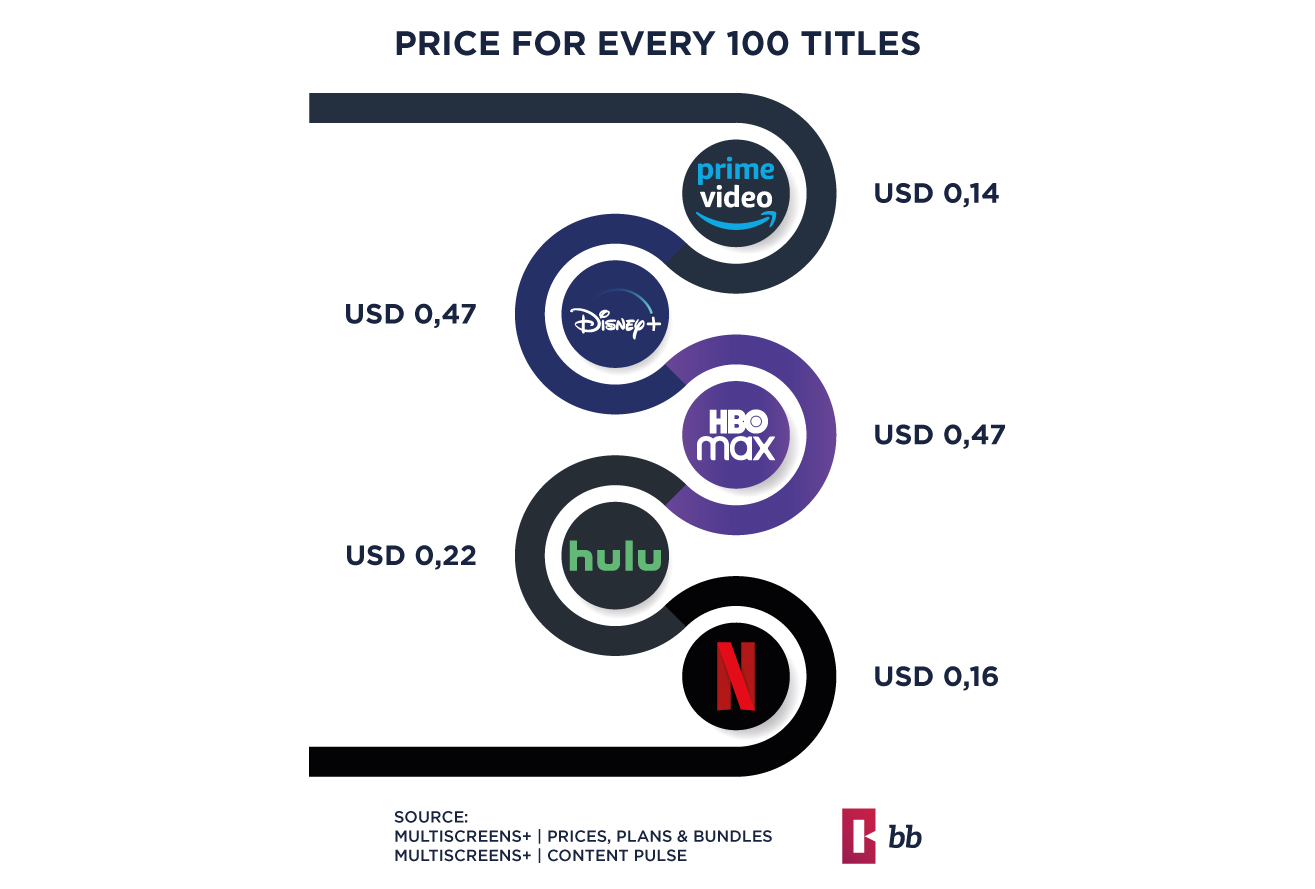 This data was gathered with our reports Multiscreens+ | Prices, Plans & Bundles, (that analyses the prices, plans, commercial alliances, offers, devices and functionalities of all streaming platforms) and Multiscreens+ |Content Pulse (which is focused on the monitoring of the content available on streaming platforms and its standardized metadata).

Do you want to learn more about this? Get in touch with us!